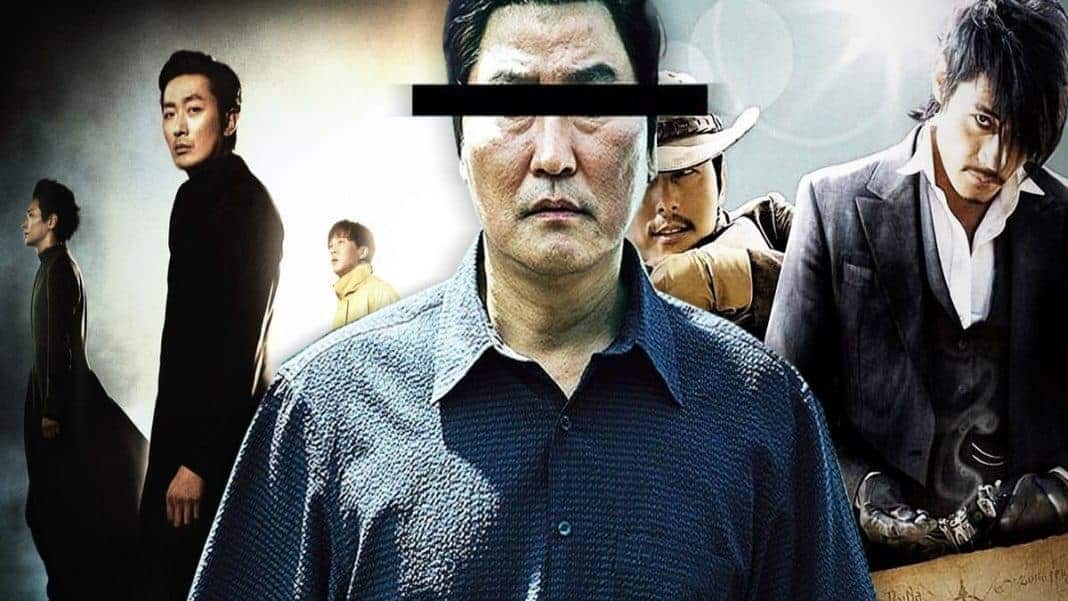 If you are a true movieholic and have not watched best Korean movies by now, then you are already far behind!  We all know the well-known popular movies like Parasite or Train to Busan, but that’s just the start of a whole treasure of unbelievable movies yet to be discovered.

Now, why don’t we try something new? If you are looking for something unique over Hollywood, then Korean movies are a must-try!

Korean movies are trending all over the globe for their inspiring fashion, unique conceptions, and style of portraying an immensely large variety of stories with different genres. Now, Korean auteurs have been killed for taking risks and defying genres.

From action to drama, comedy, and horror, performed by talented actors. However, Korean movies have proved their worth.

So, today we will not be sharing the well-known popular movies but some underestimated Korean movies to watch of all time.

Rated 88% in rotten tomatoes. The thriller movie shows a sudden zombie outbreak. This movie pulled off the “modern apocalypse” in an enjoyable, realistic, and relatable way, especially with the pandemic we live in now.

The movie showed how being trapped in complete isolation, shortage of food, weapons is driving one crazy for survival. There was no nonessential action with guns or fighters. Every scene is suspenseful. One cannot predict the next twist, which makes it even more interesting.

The action and horror were impressively portrayed in the movie.

The movie is surprisingly outstanding and is definitely worth your time!!!

Based on true events, yet another great and critically acclaimed film casting Parasite’s Song Kang ho. Rated with 96% of rotten tomatoes. This movie is undeniably one of the most liberating movies ever.

The movie portrays an ordinary taxi driver from Seoul who unintentionally got dragged into the midst of the government killing its people to silent them from expressing their views and becomes involved with a German journalist in the Gwangju Uprising in 1980 and helps him put this situation into the light.

You need to personally watch and experience this movie. This is one of the best Korean movies you will ever watch.

This tops my chart of the best thriller/ mystery movies of all time!

One can never feel bored while watching this movie. With multiple and sudden plot twists and turns, this movie kept the audience always engaging. The mystery, suspense, drama, and story twist was well balanced.

The movie starts when the protagonist sees his abducted brother return, seemingly a different man with no memory of the past 19 days. But while chasing after the truth behind the mysterious kidnapping, he stumbled upon a gruesome truth.

This movie is truly a hidden gem! At first, you may feel a bit confused, but as the scenes unfold, all the pieces will come together, and you’ll get to know what’s happening. Grab some popcorn and a cozy blanket, and give this a shot!

Minari is a beautiful family drama written and directed by Lee Isaac Chung. The movie documents a Korean-American family as they start their new life in rural Arkansas. With a dream to be more than just a chicken sexer, and a desire to own his farm, Jacob Yi (Steven Yeun) moves his family across the country, from California to Arkansas.

Amidst all the challenges in their new life amidst the strange, rural Arkansas, they discover the undeniable resilience of family and what makes a home. Being Authentic, moving, and charming, ‘Minari’ paints a vivid and beautifully textured portrait with firm and confident strokes of resilience and tenderness interspersed with specks of Korean melodrama.

A true masterpiece. Rated with 96% rotten tomatoes, this is another movie showing the director’s mastery of creativity. The movie shows how Mothers are protective of their children even if their children make mistakes or sins.

The movie portrays a widow and her mentally challenged son in a small South Korean town, where she scrapes out a living. But they get pulled into a nightmare when the body of a murdered adolescent girl is discovered, and evidence indicates the son as the prime suspect during the police investigation. Feeling betrayed by the law system, the mother starts taking the law into her own hands to give her son justice.

The movie is so impactful and leaves you stunned with mixed emotions.  If you are into great films, this one ranks high.

Fan of sci-fi? No problem!

Rated with 80% in rotten tomatoes, Psychokinesis, a full-fledged superhero movie, is the best choice!

The movie starts with a bank security guard and a father who suddenly inherited some psychokinetic superpowers, and now with the newly acquired superpowers, he sets out to experience new trills and help his estranged daughter before she loses everything.

This sci-fi movie features excellent acting, with deft attention to detail in every character so that you see that everyone is trapped in an intertwined set of dynamic forces; nobody is purely good or evil, just human.

Overall this movie is a complete masterpiece and definitely worth watching multiple times.

If you are searching for a cute, fun romance movie, give this movie a shot.

A refreshing movie about a high school girl who was forced to marry her older cousin because of her grandfather. The movie is filled with comedy as well as romance. The story has a unique nostalgic feeling to it, which made it fun to watch. Forced into the marriage, the couples can’t accept their fate, but ultimately they fall in love.

A very heartwarming romance movie. Even if watched more than 10 times and one still can’t get over the adorableness and cuteness in this movie. Highly recommended!!

Horror movies are famous for jump scares, so is this movie! The overly underrated and not popular horror movie 0.0 MHz is a good choice for a Friday movie night.

Based on the webcomic “0.0MHz” by Jang Jak, which follows members of a club which investigates paranormal cases ventured into a haunted abandoned house, planning to investigate and find a way to stop the paranormal happenings there but encounter something else instead resulting in their untimely and horrifying death.

The acting was outstanding and was executed too well. The movie all over showed horrifying and mysteries surrounding the main characters, which were very interesting and deep.

If you have not watched this horror movie, then you are missing out.

In for a laugh? Presenting Extreme Jobs!

Have we ever wondered that a team of narcotics detectives will go undercover in a fried chicken joint where their recipe will make them the hottest eatery spot while staking out an organized crime gang?

Rated with 86% rotten tomatoes, this movie is a thorough comedy filled with action, keeping the viewers tied up till last. Overall the storyline, fashion style, the acting did a fascinating job in bringing this movie out.

If you still haven’t tried any Korean comedy before, you should try it.

You will surely enjoy the whole movie a lot.

The story delivers a poignant story about a 66-year elderly woman who takes up a poetry class after being diagnosed with Alzheimer’s disease. The story is portrayed as very bitter and hopeless, yet a beautiful message of acceptance is somewhere hidden here.

The struggles faced irrespective of age and gender made this movie so beautiful—poetry without words and a feeling of wall-hugging emptiness. The nuanced emotional range she exhibits as the film progress and turns her into a different person is virtually beyond the puissance of words to convey. If you are a true fan of sad cinematic movies, then it’s a great choice.

I can have an OLDBOY except “Intelligent, classic, entertaining masterpiece.”

Rated 89% in Rotten Tomatoes, the movie shows a man held captive for no apparent reason for years, is given a cell phone, money, and expensive clothes, and released. Until he finds out the real identity of the captor, therefore, an even worse scenario awaits him.

The plot and plot twist, then the acting, which is top-notch for all the actors, especially the main character, feeling all sorts of emotions. This film has excellent action, perhaps the most classic you’ve ever seen in a South Korean film.

The visual effects are terrific, as is the cinematography. The natural humor present throughout the film is decent, as is the portrayal of human emotions in the most realistic way.

Another light romance series to enjoy is here!

As everyone knows, it is never late to start over! This movie will make you laugh and even teach you some youthful lessons! So face forward to it. The characters they played are cute. It is one of the best Korean movies.

The movie is about a girl in college getting hired as a tutor to teach a rich troublemaker. He is again repeating his senior year of high school now for the third time. The film was hugely praised for its choice of witty dialogue and avoiding unnecessary melodrama. Personally, this movie is one of the best stress relievers.

Even though rated with only 69% in Rotten Tomatoes, Be assured! That you won’t regret watching this movie. The movie set in a fantasy setup shows the path towards after-life and reincarnations.

The movie filled with comedy, guilt, adventure, and happiness will keep you entertained in every second of the film. The CGI portrayed in the plot is pretty decent as well as the acting is also quite good.

All in all, it’s quite a decent movie to watch with family and close ones.

Seoulyeok For an anime zombie film, this was decent – especially if you enjoyed Train to Busan and #Alive. This film did a great job of telling a story and making you care about the characters. It also gave us insight into the class systems and how people are deemed worthless due to their state in life.

This film is dark, and while the ending tried to show a bit of “justice. So, if you want to see a well-done anime about the zombie apocalypse with a few twists and turns, one must check this out!

South Korean dramas are always one of the best while making medieval affairs. It’s one of the most interesting war movies since it was pretty creative and youthful. This movie was based on an actual event which makes the movie even more interesting to watch.

This movie was amazing. AND the cast of this movie is also well known and talented. The action and cinematography were also on point.

The Great Battle is a story of a tyrant who wants to win people at any cost. THE GREAT BATTLE tells the story of the Siege of Ansi, where Goguryeo forces held their fortress against 500,000 invading Tang soldiers in a battle that raged for eighty-eight days.

Overall it’s one of the best historical movies ever made.

Even though South Korean Movies are stereotyped and not watched most of the time for their clique Romance Movies. We must remember that Korean movies are having their breakthroughs by winning Oscars. In the coming years, the country will be popular and praised for its unique Korean movie industry.