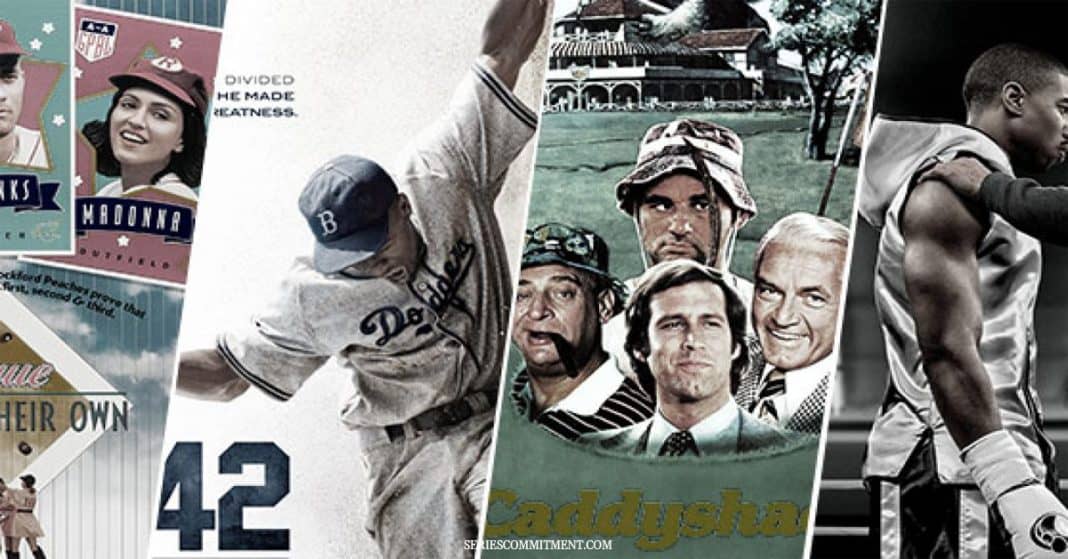 “When my body gets tired, my mind says, this is when winners are made. When my mind gets tired, my heart says, this is when champions are made”. The romancing sports genre is a popular choice amongst many such creations, as we see a flair in this monologue from Glory Days (2006). Sports movies portray not only non-stop action but also much-needed motivation! Conflict and competition are two underlying plot-themes that cook the best metaphors of life problems in a sports flick.

Slam dunk! Go for the Gold! Knocked it out of the park! If you have been hearing (or maybe using too!) this jargon way more often on celluloid than on-field, then cheers! You are surely working your way up the best sports movies of all time.

Let us dive into a robust list of best sports movies of all time:

A youngster chases a dream to play football for the team Notre Dame and faces an equal number of challenges on his quest. Rudy smoothly makes it to the top in this list of greatest sports movies because of its mature treatment of sheer determination and the human spirit. This movie celebrates the age of innocence and resilience.

It captures the aura of unadulterated sportsmanship spirit and baseball legends. A mystic wand of plotline weaves through Field of Dreams, wherein an Iowa corn farmer interprets dreamy voices as a command to build a baseball diamond in his fields!

Hoosiers (Released in some countries as Best Shot), is more than just a sports film. An appealing flick with a run-of-the-mill high school team, down-on-his-luck basketball coach, and a former alcoholic assistant surviving competition with faith and sobriety.

Sylvester Stallone nails every frame since the beginning of the movie. A dramatic knock-down-drag-out climax fight makes this one of the best sports movies of all time.

A movie with the greatest character arcs is, Raging Bull. A Scorsese favorite portrays the utter destruction of Jake LaMotta’s social life outside the boxing ring due to his violence, temper, and in the quest to reach the top.

A four Academy Award-winning gripping tale of a resilient and determined woman who works her way up to the top in the profession by working with a hardened boxing trainer.

Boaz Yakin’s Remember the Titans is based on a true story about a novice coach of African-American origin and his historical feat in the sports field. One of the best sports movies in which a team plays as a racially-integrated team for the first time is in non-enlightened times.

A film packed with action sequences, emotional levers of fighting cancer, and an interracial friendship during the worst of times. This film is a cinematic experience of a true story portraying hope, love, and inextinguishable heroism. Must watch!

Marvelous storytelling of a novice boxer’s attempt to escape the dark shadow of his troubled and popular elder brother, who is a boxer too, and aim for a greater future.

An emotionally spellbinding tale of a traumatized and homeless child who becomes a first-round NFL draft pick and a great football player with support of a woman and her family. Truly on the best sports movies of all time!

Invictus books a spot amongst great sports movies with its unique making of visualizing the venture of Nelson Mandela to unite the Apartheid torn land and proficiently lead a rugby team to win the 1995 Rugby World Cup.

This film makes it to the greatest sports movies of all time with a runtime of three hours and nine minutes because of its enchanting infusion of realism into drama and in-depth character arcs. This sensitive and emotional sports drama strikes a chord with all.

A newly moved mother and child struggle to survive in California. The character arc of the boy goes through triumphs and joys of adolescence and mastering Karate. A beautifully crafted tale of Miyagi (Japanese landlord) teaching Karate to the protagonist.

A sports-action genre movie, which is more than just a tribute to a great personality, Paan Singh Tomar. A seven-time national champion and an Army soldier who is forced to become dacoit due to prevailing circumstances. A true masterpiece and portrayal by Late Irrfan Khan.

Tale of James J. Braddock, who was a boxer, now comes back to become an inspiration and a champion in the early 1930s. This masterpiece is essentially one of the top sports movies ever made.

I hope you enjoy all of these greatest sports movies of all time!