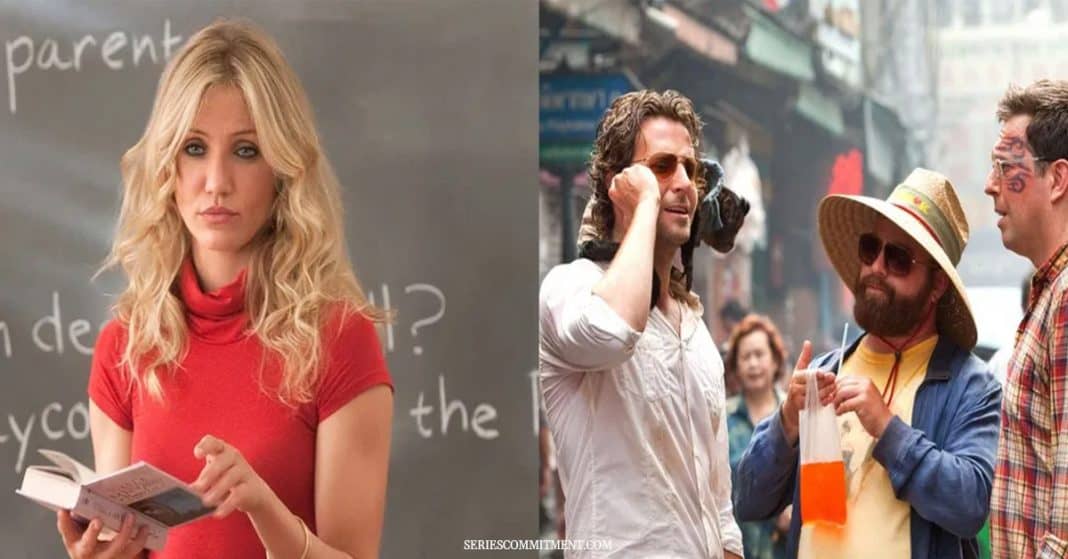 Comedy has been an integral part of history. With time these movies, directors, and actors have changed, and the movies have evolved quite a bit. These days the movies have grown to a certain degree that comedy has become a part of even the darkest of movies.

There is always a hint of humor present, whether it be romance, crime, action, or adventure. It is challenging to tell which one; after all, you can never judge a book by its cover. So, without further discussion, here’s a list of the top 15 best comedy movies of all time.

This movie has been written and directed by the multiple Oscars winning renowned director Quinten Tarantino. This movie has got the two biggest stars of Hollywood Brad Pitt and Leonardo di Caprio as the lead. You can watch this best comedy movie on YouTube.

A densely-plotted yet scintillating exploration of the television and film industry pertaining to the late 1960s, the story here talks about a fading TV western star by the name of Rick Dalton whose paths cross over with those of his neighbour and another rising star Sharon Tate coupled with a trio armed for the trouble of Charles Manson acolytes.

This movie shows how the life of a Pakistani comedian trying to make a name for himself completely changes when he meets this girl and falls in love with her. This is undoubtedly on the list of the best comedy movies of all time.

The central plot point of the movie revolves around a potentially deadly illness, which is well-elucidated through the title. The movie, as a result, provides not only drama and catharsis but also certain extraordinary levels of dark humor. Also, it permits the characters of the movie to evolve in real yet substantial ways.

If you are searching for the family-friendly best comedy movies that are hilarious, then this the one for you. This movie has a very positive underlying message, and it will surely leave a smile on your face. You can also add this movie to the kids’ movie list.

Also See: Best Indie Movies You Need to See Before You Die

The story simply involves a young boy who dreams about playing the guitar, while his family, because of his great great grandfather, is against the idea of him playing. The movie starts well while storming out with an incredibly lovely and emotional ending to it.

From the very similar studio which brought marvelous movies such as Tangled, Frozen, Big Hero for us, Zootopia comes out as a highly original, thoroughly engaging, incredibly refreshing, and surprisingly timely movie of all time.

It can undoubtedly be called one of the best and delightful, subversive beast fable pertaining to stereotypes and prejudices, which, apart from marking a relatively new and excitingly creative high for Disney, also is one of the best and finest animated creations the studio has ever come up with.

A classic selection presented with a lot of drama and action that everyone has seen at least once during their time growing up, Toy Story is a must to watch. The story revolves around Andy, who possesses many toys, while Woody is his favorite one. Every Christmas and birthday, he is presented with a new toy and a possible competition among them.

The movie involves good and witty use of humor, which never feels dated. With its insane visuals inspiring every 3D animated film, the movie didn’t shy away with perfect camera movements and interesting angles even in this day and age.

Apart from being an innovative part of cinema history, the movie is a must to watch for its spectacular humor and perfect depiction of life.

The movie revolves around Doug and three of his best men who visit Las Vegas in order to celebrate his bachelor party. When they wake up the next day with a complete hangover, they realize that Doug is missing. This is followed by a humorous tale of events in order to discover more about Doug.

A perfectly funny comedy that is raunchy, extremely engaging, and unique on the same hand, the Hangover is one of the best films to watch. With a perfect script and characters pulling all the dialogues off as if they were written by themselves, the movie is consistently entertaining and funny.

A well-made comedy, possibly the best of comedy movies to watch with your friends and family.

Originally made for television, Zombieland turned out to be a film that is, without the shadow of a doubt, the best zombie comedy movie ever made. The cast of the movie is sure to keep you entertained all throughout the film, which was surprisingly shot in just 42 days.

What will you do while living in a zombie apocalypse? The story revolves around a nerdy survivor who contemplates and tries to successfully make it through a zombie outbreak and other survivors.

Who would not want to watch such a hilarious movie? Funny, refreshing, and entertaining, the movie narrates an inventive story and throws action for the very first moment in unexpectedly brilliant ways. While unspooling the story of an insane yet oddly charming antihero, the movie includes fast forwards and flashbacks in the freshest and exciting ways.

With beautifully designed action and playful visuals, the movie is one of a kind. The movie is a must to watch if you are a fan of romantic comedy.

A fake family on their way to Mexico is trying to smuggle drugs into the US’s borders, watch them as things go wrong, and find love for each other.

As far as comedy movies are concerned, this one is certainly one of the best movies you will come across with many interesting roles, either drug dealer, geek, or stripper. A movie with a plethora of funny moments, We’re the Millers is a raunchy movie with a lot of gags and jokes. Anyways, who can hate Jennifer Aniston?

Every person has heard this name at least once before. This is a hilarious movie with so many things that will keep you wanting more and more.

21 Jump Street mixed with comedy and action never fails to deliver humor towards your end with such great action sequences, hilarious performances, and joke delivery which keeps coming in from time to time, around every 10 seconds.

A classic that has gained a lot of international recognition and a lot of appraises from the people, which does an amazing job of keeping people laughing throughout. This is surely one of the top comedy movies.

The movie revolves around Borat, the Kazakh TV talking head to the United States in order to report on the greatest country in the world. With the presence of a documentary crew in tow, Borat soon ends up gaining more interest to locate and marry a woman named Pamela Anderson.

An outrageous, insightful, and funny movie, Borat is sure to burst half of the blood vessels of your face.

A very old movie that has a cast of hilarious people on planet earth who have done an insane job at keeping you laughing. There is not a moment when you are not laughing. that is why I am including this movie in our best comedy movies list.

The movie simply is based on the life of Ron Burgundy, a prominent actor who loves enjoying his success amidst the news industry driven by males. Plots change when Veronica, an ambitious female reporter, comes into the big picture. The movie is a pure comedy with a perfectly crafted production and a lot of hilarious and memorable moments to cherish.

With Kevin Hart as the lead character, this movie is sure to make you laugh uncontrollably and leave a smile on your face as you finish watching it. The presence of Hart and Ferrell ends up making the movie more fun, hysterical, raunchy, silly, and enjoyable in every way.

The movie is clever and funny, with a perfect camaraderie between the characters. Pertaining to its crude language and humor, the movie is sure to make you laugh hard.

With the hilarious duo of The Rock and Kevin Hart, this movie is out of this world. There is so much that the directors and actors have put into this movie to make it such a hit.

The movie constitutes the life of an accountant names Calvin Joyner which drastically changed and took a turn when a classmate in his high school, Bob Stone, forces him into a dubious covert operation.

There are very few movies that make you laugh like this one. It is the story of a few actors who end up in an actual situation that they have to deal with on their own. This is one of the best comedy movies.

A 2008 satirical action comedy, Tropic Thunder, is directed by Ben Stiller. It is one of the best and funniest movies that revolve around a group of actors who are self-absorbed and set out to build up one of the most expensive films with respect to wars.

Is Laughter one of the best medicines and a comedy film? Yes, it essentially never fails to do that. The aforementioned are a few of the best-winning comedy movies of all time, hope you enjoy them. Do let un gain cognizance of your preferred list of movies.