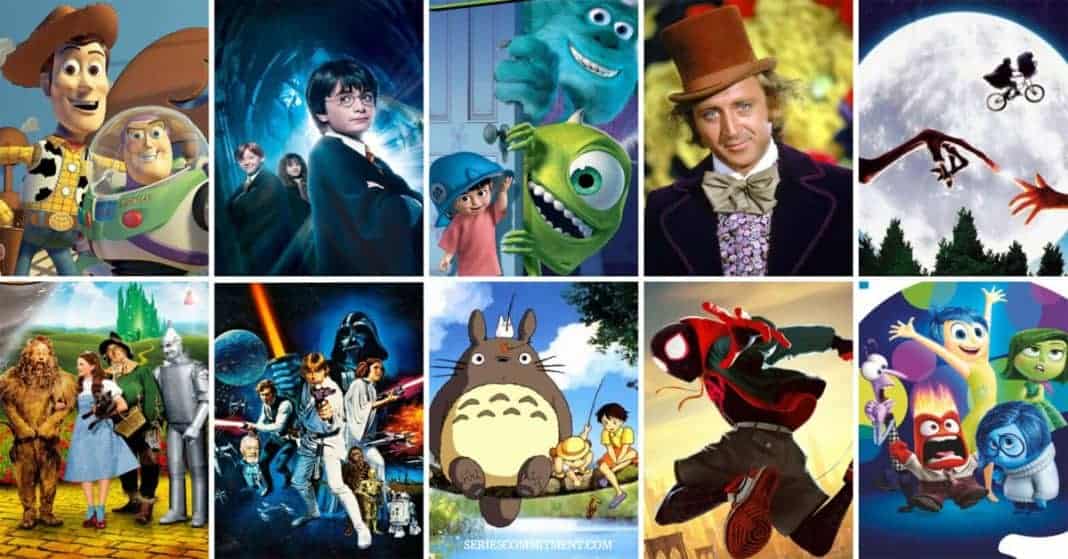 There is no feeling better in this world than curling up with your kids and watching a hearty movie on any given night of the week. These movies keep the children entertained and leave them with positive messages and uplifted morals.

Some movies are sure to bring laughter to your children’s faces, and some might lead them to shed a tear or two, some might intrigue them, and some might just put them to sleep, but all of them are worthy of some quality family time.

Here is a list of the best kids movies to watch with your kids:

The movie showcases a humorous and heroic life of four, each possessing superpowers of their own. After the government banished superhero activities involving fights and other heroic events, it caused civilian casualties, even though it was unintended.

Abiding by the rules, the couple had to return to normalcy, living a normal civilian life but the deep nostalgia of Mr. Incredible vanishes when he had to be summoned to an island to battle the vicious robot, Syndrome.

See Also: Best Inspirational Movies That Will Change Your Life

An animated story revolves around four animals from the New York Zoo: a lion named Alex, a giraffe named Melman, a hippopotamus named Gloria, and a zebra named Marty.

Marty gets bored with his subjugated life, so he plans to escape to Madagascar with the help of 4 fleeting penguins. His best friends request him to get back, but his friends, upon his resentment, join him. However, chaos is created at The Grand Central Terminal, which leads their expel to Kenya.

While onboarding penguins to another vessel, four of them are separated when their crate falls and washes onshore. After many dilemmas, tumultuous and fuel, they all experience the wildlife by being on each other’s side.

Regarded as one of the most popular kids’ movies, Lucy and her siblings find a wardrobe that lands them in the magical world of Narnia, which the White Witch ruled.

Narnia was covered with thick white-sheet of ice and extreme winter, and Lucy returns home through the same wardrobe, but, on her next journey back to Narnia, she is secretly accompanied by her brother, Edmund, there he meets the Witch Which who allures him.

On the last visit to Narnia, all four children encounter the lion, Aslan, who guides them to end evil prophecy.

It is available on Netflix, Prime, YouTube, and GooglePlay Movies.

Mr. Bean is one of the most popular TV shows in the history of television. This movie showcases Mr. Bean’s who wins a trip to France where he tries to catch up a train to the south of France, but this attempt turns into misery when he asks a Russian film director, Emil, to shoot his onboarding video using the camcorder.

But, this leads to Emil missing out on the train while Emil’s son is still on the same train; Emil files a kidnapping case against Mr. Bean; meanwhile, Mr. Bean loses his wallet and identity to prove his innocence. After a long turmoil, Mr. Bean helps the two of them to reunite at Canvas Film Festival.

In a land of Vikings and dragons, Hiccup, the Viking Chief’s son, becomes ardent to save his town from the invasion of dragons; he sets out to train himself and soon defeats the Night Fury Dragon.

Despite killing him, he befriends the most dangerous dragon out there by accident and comes to terms with the fact that his people had wrong assumptions about dragons.

However, Hiccup, along with his dragon friend, Toothless, takes the responsibility to fight against treacherous and eerie.

This is one of the best movies for kids ever to be made. Po the Panda is destined to become the Dragon Warrior, who will help save China and the Famous Five.

Under the guidance of Master Shifu, they try to restore the peace of the Valley of Peace. Po learns that Tai Lung, the tiger who was once the warrior, is meant to be treacherous; Tai Lung is heading towards the Valley of Peace to take his revenge of imprisonment, acclaiming the Dragon Scroll given to Po after martial arts training. This movie is of comedic excellence, full of pompous and heroic fights.

Baby’s Day Out is a comedy film; a baby from a wealthy family is kidnapped by three criminals, who demand 5 million dollars from the baby’s family.

The baby proves to be a smarter one and sets out on an adventure of his own by sneaking out of their reach. Failed to get a hold of the baby, the kidnappers are caught up by the police.

It is available on Hotstar, HBO, YouTube, and GooglePlay Movies.

This one sets names in the list of top movies for kids. ‘Lion King’ is the story of Simba, an exiled lion and the true prince of his father’s kingdom, who is deceived by his cruel uncle, Scar as the murderer of his father. Simba eloped away from his home after being accused.

However, he returns in time to take what is rightfully his and discovers that his uncle killed his father to ascend the throne.

A timeless classic, ‘The Sound of Music,’ is based on the Trapp Family Singers. It is a tale of love and belonging. A nun is sent as a governess to take care of seven motherless children; Maria plans to handle the mischief children with love and affection as it will be the only way to praise the joy in their lives.

It is available on Prime Video and for rent on YouTube, GooglePlay Movies.

A machine made to clean up a waste-covered Earth develops a relationship with another robot. Wall- E had to comply with a secluded and lonely life after humans abandoned Earth.

A spaceship intrudes to Earth to determine the possibility of survival; a robot named EVE was assigned this mission; WALL-E forms an emotional attachment to EVE and resents his departure when the spaceship comes to take EVE.

They set out together on a path that would alter humanity’s destiny. It can easily be termed as one of the best movies for kids.

As an after-effect of a gruesome tornado, Dorothy and her dog find themselves wandering in the magical Land of Oz. They set out on a journey to reach Emerald City and meet the Wizard of Oz as it can only help them reach their destiny.

It is available on Prime Video and for rent on YouTube and GooglePlay Movies.

To cope with a recent tragedy, Jess, a poor country boy, and his friend Leslie, a rich city girl, create a magical land using their imagination named Terebithia to run away from the havoc of family and bullies school and become its rulers.

The two loved to cope with the new fantasy and adventure world of Terebithia, but soon a tragedy struck Leslie and Jess had to return to normalcy with whatever that Leslie taught him.

It is available on Netflix and for rent on YouTube and GooglePlay Movies.

Even after his family’s ban on music, Miguel follows his passion for singing into the Land of Dead, the land of fantasy where he meets his favorite stars and trickster, and he learns about his great-great-grandfather, who was a legendary singer. Miguel set out to reveal the truth behind the banishment and the Miguel family history. It sure counts as a good kids’ movie.

The Little family adopts a son named Stuart, even though Stuart,  a rat who can walk and talk like rational human beings, keeps their son George company.

However, George doesn’t like Stuart much; on the other hand, the cat, Snowbell, develops jealousy towards Stuart; it plots against Stuart and fellow cats to get rid of Stuart.

Stuart had to undergo difficulties since Snowbell had a disliking towards Stuart; also, he was smarter and sensible than her.

It is available on Prime and for rent on YouTube and GooglePlay Movies.

A concept relatively new to the world at the time, Elliot, a young boy, finds and saves an Alien who was left behind on Earth and decides to keep his presence hidden.

Since he is afraid of departing from his new friend, he keeps his identity confidential unless his siblings discover it.

Due to some circumstances, Alien’s presence is revealed to the government, leading to chaos and trouble for both Elliott and Alien. The government tries to capture the Alien as it might harm the citizens.

It is available on Prime Video and for rent on YouTube and GooglePlay Movies.

These are some of the best kids movies out of a long list of movies. Hope you enjoy watching them with your kids!