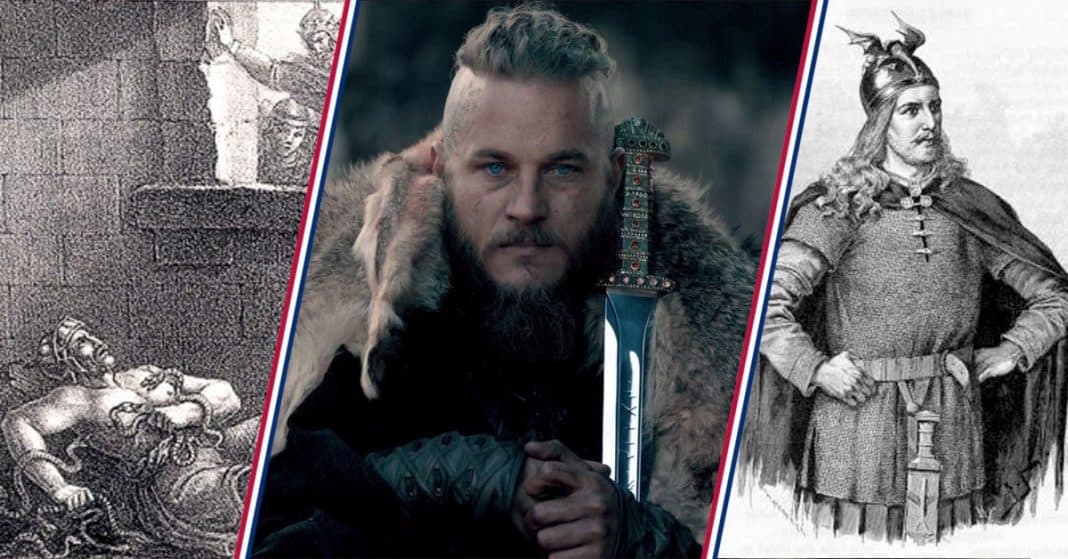 Ragnar Lothbrok is one of the most well-known, if not the most, Viking heroes to have ever existed. He was a legendary Viking hero and a renowned King of Denmark and Sweden.

Many sources have talked about him at length, including Icelandic sagas, Old Norse Poetry is written during the Viking Age, and some contemporary chronicles. Norse legends have also spoken about this legendary figure.

In the hit series Vikings, King Ragnar Lothbrok (Travis Fimmel) came back to Kattegat after so many years with the fire of revenge in mind.

He was determined to take revenge and was prepared for the action no matter what happened. He tried to capture Paris again after the demolishing defeat. But, his own brother Rollo (Clive Standen) acted against him and he walked away from the king’s responsibility.

After returning, Ragnar didn’t get a warm welcome but that couldn’t make him discouraged to go to England where he ultimately died. So, what was the last word of King Ragnar Lothbrok before death? We got everything here.

Ragnar returns to Kattegat to get revenge against King Ecbert of England for the settlement he destroyed in Wessex years ago. However, upon learning of the destroyed settlement, the people no longer wish to follow him.

They believe the gods have abandoned him. Lagertha refuses to accompany him to England and Bjorn, Sigurd, Ubbe, and Hvitserk. Iver agrees to come along. Ragnar digs up some treasure and successfully bribes a couple of other warriors to set sail with him.

Many of his warriors fall during the journey to Wessex. The treacherous seas show no mercy to anyone. Ragnar and Ivar later slaughter the ones who successfully survive. Once they reach Wessex, the father-son duo made their way to Ecbert.

Ragnar asks Ecbert to kill him, but the latter refuses. He instead agrees to hand him over to King Aelle. He also promises not to harm Ivar and even arranges a safe passage via ship to return home.

Before Ivar returns to Kattegat, Ragnar instructs him to tell the tale of his death (i.e., Ragnar’s). Fueled by revenge, his other sons would return with armies to exact revenge on his murderers, and he would successfully have his revenge.

His initial revenge plan had fallen through the moment his people refused to follow him. This was the only one he could stake his life on.

When Ecbert questioned him about his belief in the gods, Ragnar confessed he didn’t care for them anymore. But, since he knows his sons still devoutly believe in the gods and their blessings, he wishes to leave them with something to remember. He plans a heroic speech about Valhalla and the Gods to be said to them once he’s departed from this world.

On Ragnar’s bidding, Ecbert hands him over to King Aelle. The king has him beaten to an inch of his life, a cross carved into the middle of his forehead. Following this, he gives the speech he had planned for all along.

What were Ragnar Lothbrok’s last words?

This is what Ragnar says:

“It gladdens me to know that Odin prepares for a feast. Soon I shall be drinking ale from curved horns. This hero that comes into Valhalla does not lament his death. I shall not enter Odin’s hall with fear. There I shall wait for my sons to join me. And when they do, I will bask in their tales of triumph. The Aesir will welcome me. My death comes without apology. And I welcome the Valkyries to summon me home.”

He’s then thrown into a pit of snakes and is left at their mercy. And anyone can deduce what follows that. The snake bites, and their venom finally kill him.

Once his sons learn of their father’s death, they return to England with the Great Heathen Army. Ecbert chooses to commit suicide while King Aelle is killed by Bjorn Ironside, the oldest of Ragnar’s sons. Ragnar’s revenge was complete.

You see, Ragnar’s plan was always one that ensured his death. He knew he would die the moment he set foot on Wessex. However, he didn’t let that deter him in the slightest. For him, his revenge was far more precious than his own life.

Was his death accurate to the historical Ragnar Lothbrok?

Very close, yes! His death was pretty much the same if history is to be believed. Danish historian, Saxo Grammaticus, wrote in the Gesta Danorum that Ragnar Lothbrok met his end at the hands of Anglo-Saxon King Aella of Northumbria. After being captured by King Aella, Ragnar Lothbrok was thrown into a snake pit and succumbed to their venom.

The same as what the show did. Well done, Vikings!

Is his speech taken from an actual source, too?

Krákumál, also known as the Lay of Kraka, is a skaldic poem dedicated to Ragnar Lodbrok and the remarkable life he led. It is assumed to be a monologue of Ragnar Lodbrok reminiscing of the heroic deeds he did while his life slowly fades away, lying in King Aella’s snake pit of death. The joys of being a warrior, the hope for brutal revenge following his death, and the relief of knowing Valhalla await – all are detailed in this poem.

It was composed in the 12th century in Iceland and consisted of 29 stanzas having 10 lines each. Thomas Percy and Rev. James Johnstone (only the first 13 stanzas) both played an invaluable role in translating the poem to English.

This very poem formed the basis of Ragnar Lothbrok’s final speech in Vikings. The 23rd Stanza of this poem was also read out in Old Norse in the episode “The Best Laid Plans”.

The 13th Stanza of this poem was specifically used during Ragnar’s death in Vikings. Of course, some liberties were taken, and the translation is loose, but it gets the same point across. These were the original lines from the poem:

We hewed with the brand!

Full gladly do I go! See the Valkyrjar fresh from Odin’s halls!

The Aesir welcome me. Laughing gladly, do I die!

Sounds similar, yes? Vikings followed it quite faithfully, so of course, the resemblance is quite uncanny. Whether it was the original poem or the show adaptation – Ragnar Lothbrok always knew he would have his revenge following his death.

So, as you can see, the show was very faithful when it came to adapting to Ragnar Lothbrok’s death and his heroic speech. Not only did they do a superb job understanding the source material, but the execution was done masterfully as well.

A hero till the absolute end.