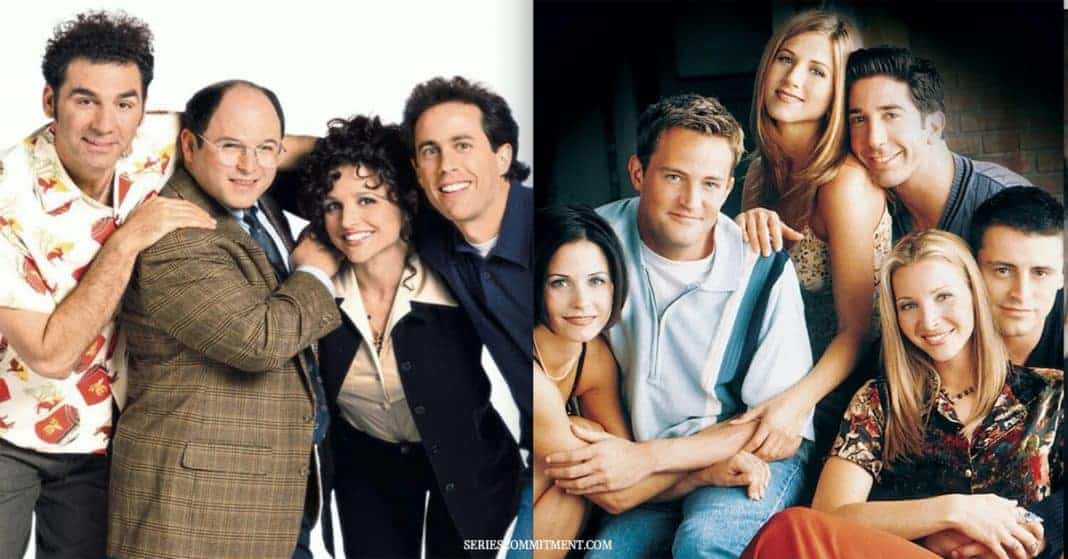 “Laughter is God’s hand on the shoulder of a troubled head” – Betenell Huntznicker.

Do you have a knack for comedy and humor? Are you waiting for something that can make you roll on the floor laughing? Then you have reached the right place at the right time. Gear up yourself with earphones, popcorn, and screens on. Binge-watch these comedy TV shows to laugh it out loud. Watching them on television or the online platform is your call.

Here is a list of 15 best comedy tv shows of all time that you will fall in love with and can relate to the most.

The most relatable and ridiculous comedy show one could ever demand. It revolves around the lives of six friends living together in New York City. It is a blend of friendship, love, fun, and struggling careers. This show will give you several chances to laugh it out loud.

Having the highest IMDb rating, this show tops the list of the best comedy tv shows. It centres the manager of the mediocre paper company and his employees. All these members have their lives surrounded by humorous adventures in everything they do to thrive.

The storyline follows a gang of five friends who runs a bar in Philadelphia. They are trying to figure out the way of the adult world of work and relationships. However, anything that they plan for the betterment leads them to uncomfortable situations comedic to the audience.

Centered around Larry David, this show has formed a huge fan-base. Larry, as a semi-retired television writer and producer, keeps getting into trouble in one way or the other along with some of his friends and colleagues.

It is about the Bluth family that used to be rich but now has lost everything. The family head is far behind bars and loving it there. The family is quite dysfunctional that iswith their typical attitudes putting the show under the best comedy TV shows.

It follows the character named Leslie Knope, who works in the Parks and Recreation Department in Indiana. The show has character-driven comedy along with satire. The level of comedy increases with every passing episode.

Silicon Valley is about the lives of six programmers living together and trying to make it big in Silicon Valley. The sitcom is full of satire, competition among start-up companies, successes, and failure incidents. You will find it funny in anything that goes on with the characters.

An American sitcom with the on-screen duo of two women Ilana Glazer and Abbi Jacobson. It has covered their daily life events that are disturbing yet comic at the same time. The show has a full package of five seasons. It is counted among the best comedy series.

Available on Hulu and Vudu.

The creators tried to show the police proceedings of America comically. It revolves around a group of NYPD detectives. There is a never-ending conflict between Jake, the immature detective, and the captain. His way of investigation and the conflict are always served with all the flavor of humor to it.

It has three interrelated families. It has shown mostly relatable comedy incidents that any family goes through. It makes the show quite relatable to the incidents that you encounter within your own family.

The story revolves around a filthy rich family of Johnny Rose and Moira with their kids David and Alexis. Among the funniest TV shows, it has the quirkiest comedy elements as they go bankrupt and move to a small town, Schitt’s Creek.

Armando Iannucci presented American politicswith the perfect tint of comedy and satire through the show. The show has a lead character Senator Selina Meyer as the Vice President of the U.S., who used to have a perception of politics that is way too different from its reality.

It is based on the concept of the afterlife in a world called “the Good Place.” Out of the six characters, four have died and recently entered their afterlife, while two of them are the operators of “the Good Place.” The typical plot manages to have all the criteria of the comedy TV shows.

Tina Fey’s American sitcom is full of comedy and satire. It is somewhat based on Tina’s personal experiences working as a writer for Saturday Night Live. The show has maintained a reputation in comedy and lasted for seven seasons.

With the setting of the mid-90s, an Asian American family of 12-year old Eddie Huang moves to America. The adjustment of this Taiwanese family into the American culture has been presented in the most fun way possible.

Watch it on Hulu, Prime Video or Disney+Hotstar.

Your wait to find the top comedy TV show is over now. Choose any from the above list and have a blast of fun and laughter in your life.