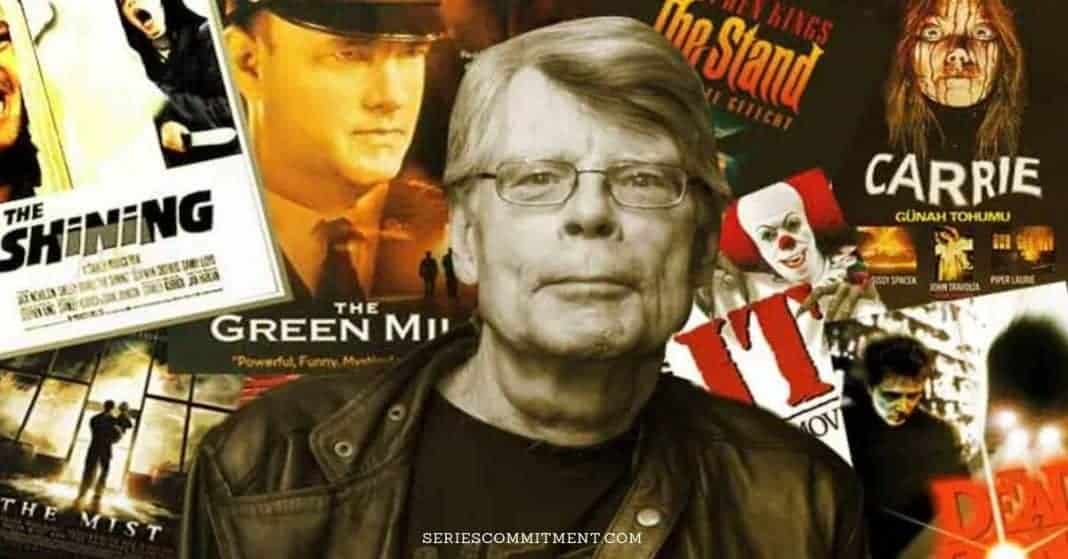 After two years of publishing his first novel, Stephen king never thought that he would be such a big name in the writing domain, and his work will be adapted by Hollywood directors, making millions on box office.

With total movies made, 5% of them fall in the horror genre, and of the topmost writers for horror movies is Stephen king. Stephen King’s nightmares novel adaptation in 2017 made it clear that Stephen King’s movies and his writing can make you scream with popcorns in your hands. “IT” made more than $700 million on box office. Stephen King movies make the audience experience goosebumps with the iconic characters.

Stephen King’s iconic killer clown story engaged the audience and made it one of the most successful novel adaptations. The horror genre makes our adrenaline rush, which makes us crave for horror more. Stephen King movies take the audience out of their comfort zone and let them experience the thrill and fear.

The thriller element of King’s movies makes them one the best in his category.

We are here to countdown the best Stephen King movies of all time.

Hafstrom creates a decent thriller based on Stephen King’s short story, which isn’t always easy to do as many directors have learned and fans of King have experienced. Great direction, screenplay, cinematography, special effects, soundtrack, and acting. The entire actors involved do a fine job; however, Cusack stands out and not simply because he dominates most of the screen time.

Cusack creates a blatant non-believer and expert at what he does, then turns him into a psychologically tormented and horrified victim of his arrogance. One of the best Stephen King’s movie ever made it’s a slow descent script turned into madness, and this perfectly captures a book’s ability to keep you in a moment in time only in this case you feel trapped by it, it is one of the top Stephen King movies.

Another old but memorable Stephen King movie with a great plot and scripting of the storyline, one of King’s best movies, This story of perception and the decisions put upon the characters felt very convincing thanks to a fantastic cast and meaningful plot. A great movie with a good plot, good direction, and a great core performance by Christopher Walken. Suspense thrills and dramatic moments are all present in this film.

King’s work has been successfully shined in genres other than horror. But Stephen King has been entitled with the name “King of Horror.” What makes Stephen King’s horror movies more terrifying is their connection to reality and our society. He not only connects horror to supernatural abilities and paranormal activities but he connects horror to society, politics, which increases the spectrum of the movies makes them more appealing to the audience. Stephen King horror movies characters are self-reflective and grounded in reality.

As a result, the horror feels all the more intense. Things that jeopardize the very basis of the society in which we reside. As he once said, it’s not the physical or mental anomalies themselves that frighten us, but the lack of balance in our life that they reflect.

Stephen King is recognized with 60 novels, five nonfiction publications, and at least ten collections of short stories. At least 50 film versions of his works have either been made or are in the works. King is popularly considered as one of the most well-known and influential horror authors of all time.

A cat intertwines three of Stephen King’s storylines together, including a stop-smoking facility, a philanderer who is forced to take a chance by walking on a ledge more than 80 stories up, and a breath-stealing troll on the hunt for Drew Barrymore. It’s old school in the days before computer-generated imagery. This film perfectly captures the spirit of the mid-1980s.

A classic ‘horror’ film. The best John Carpenter film because of its sound, variety of characters and their chemistry with one another, suspense and music, and, most importantly, the killer car herself. A must-see for any horror buff, as well as Stephen King or John Carpenter fans. While not necessarily self-aware, it does feel tongue in cheek.

The darkly comedic tone blends well with the horror elements and feels scary. The special effects are simple yet effective, but it’s the sound effects that truly hit you, especially on a surround sound system – The roar of the engines, screeching of the tires, and crunching of metal was glorious.

It’s one of the most criminally underrated movies in the horror genre. The movie is not so much about the creatures in the Mist, but the nature of man in times of crisis and utter desperation. The ending is a gut-punch and even got Stephen King’s approval which went so far as to say that he liked Darabont’s interpretation of the ending better than his and that he wished he had written it that way.

This film is scary and science fiction, but fear and apprehension become meaningless as it descends into its depths. The film, based on Stephen King’s novel, creates waves of fear in the body and seeks to find the meaning of human and blood relationships.

An iconic horror anthology film that laid down the foundations for shows. After the success of Creepshow, George A. Romero went on to create Tales from the Crypt and Tales from the Darkside. The 1950s horror comics’ influence gave this film a distinct vibe and aesthetic that no other horror film I’ve seen even approaches. The acting and writing were both excellent.

A fantastic film! The spine-chilling opening assault on Georgie is one of the terrifying scenes in a horror film. The acting is excellent throughout, with Bill Skarsgard standing out for his special and explosive take on the famous Pennywise the Dancing Clown. And, though it has several heart-warming and humorous moments, it is also sprinkled with wit. Stephen King was also a fan of this film, which is universally appreciated as one of his novels’ best film adaptations. It is considered to be one of the best Stephen King’s horror movies ever made.

With a 9.3 rating, The Shawshank Redemption is ranked first in the Top-250 English Movies reported by IMBd. Many film critics regard it as one of the best films ever made in World Cinema. Frank Darabont directed this film, which was based on Stephen King’s novel of the same name. This great movie is absolutely an everlasting gem of world cinema. Don’t miss this great movie; it’s a lifetime experience of a kind you won’t ever forget. This is the top Stephen King movie.

The Shining is a perfect horror and knows how to create beautiful suspense. Kubrick kept us hooked by letting us know something is coming at any moment; we just watched to see what Jack is going to do.

The symbolism is very artistic and very unique. Stanley Kubrick’s cold and frightening “The Shining” challenges us to decide: Who is the reliable observer? Whose idea of events can we trust? What distinguishes “The Shining” from other horror films is that there’s something visceral under the surface, something subliminally evil at the heart of this film, that its legacy is almost as ghostly as the ghosts that populate its source material.

It’s the kind of film that gets under your skin and sticks with you for a few days, if not a week after you see it. It’s not a film that can entertain you.

Carrie remains a moving, tragic, and at times scary film. Brian De Palma nailed the combination between these elements. Combining social, mind-control, and bullying/intimidating themes as both of these things can be daily horrors that people experience and have to deal with; telekinesis or not.

The raw emotion and supernatural elements, mixed with realistic teenage personalities and a bit of light-hearted humor, make it stand out. The ending was disturbing, but the violence, while brutal, was surprisingly tame. A well-made horror film from Stephen king’s first novel about a social outcast, this Stephen King horror movie is a masterpiece of that time.

Observing Stephen King’s works is a brilliant way to learn what worries us at the end of the day. His works are prime examples of demonstrating that our object of terror does exist in our reality. Stephen King’s movies depict his knowledge of horror more than anyone else, or maybe more than anything else is familiar with and comprehends.