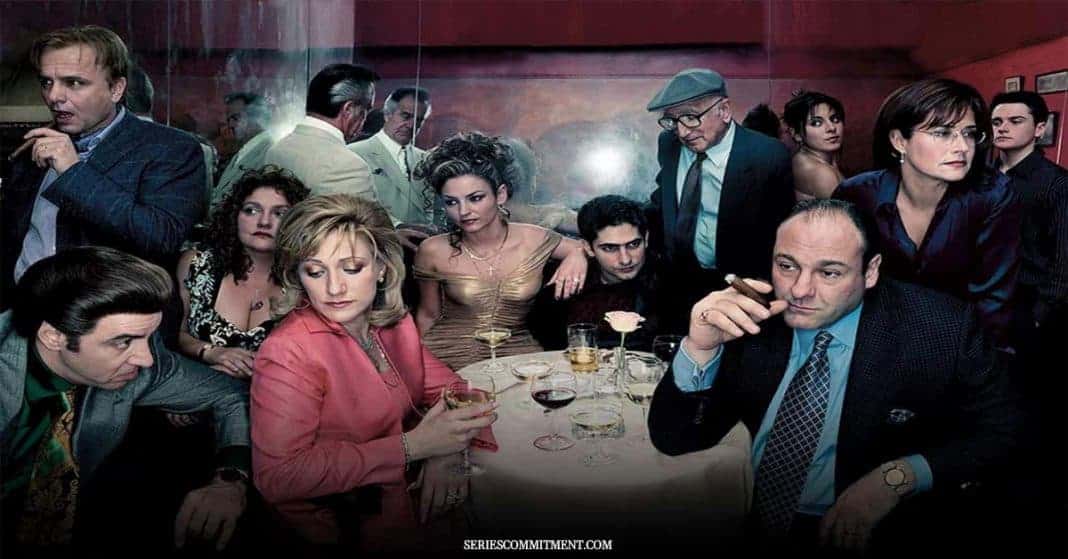 Imagine, you’re alone at home. You don’t feel like texting your buddies or snapping some pictures of yourself with animal filters. You are just too lonely, but you have exhausted your “social battery” for the week. The lack of activity has plunged you into the existential crisis of “what to do?” Well, fret not!  Here’s the solution. Grab the remote and get ready to switch on to some of the best TV series of all time. Watching TV has its perks. Firstly, you get to experience unimaginable situations through visuals. Seriously, kids are venturing into a parallel universe, cops playing bingo, and even zombies chasing mortals.

And well, it’s refreshing to have the TV on while you tap away on your phone. It makes you less lonely.

Whatever the case, let’s head on to the list of best TV series of all time!

Friends is a light-hearted comedy that portrays the lives of six buddies living in New York. Together, they face life and discover different shades of it. Even the newer generations find it relatable. This is one of the best tv series of all time that’s why this series is on top of our list.

It has ten seasons and is available on Netflix as well as Comedy Central.

Big bang theory is based on four friends who are awkward geeks (and also intelligent physicists). They befriend their neighbor Penny, who makes them realize how little they know of the world outside their lab.

This is probably one of the best TV series of all time and also one of the longest-running. It can be viewed on Netflix, Hotstar, Amazon prime as well as Comedy Central.

Sheldon Cooper, the beloved character from the big bang theory, is back. Just in a much younger and cuter version. The series follows the life of a younger Sheldon who went on to become the Sheldon seen on the Big Bang Theory. It can be watched on Netflix, Prime Video, TeaTv as well as Comedy Central.

The community is based on a lawyer, Jeff, who is sent back to college to pursue his degree after his license is negated. In community college, he befriends people from various communities of society and forms a study group. Together, they face the college life. This is one of the best TV shows. You can get it on TeaTv.

Probably one of the most delightful best tv series of all time. Brooklyn nine-nine is a cop comedy. It takes on a new case each episode. Even with the crime element present in the show, it manages to balance crime with comedy. It also shows the personal lives of the characters. You can watch B99 on Netflix, Hulu or Comedy Central.

The GoT is largely based on books by George R. R. Martin.

It has many characters belonging to different clans. They’re all fighting for “Iron Throne.” The dragons and wolves just make GoT super cool. And you will cry at The Red Wedding. Shows like this are very popular among youngsters.

This is undoubtedly one of the best TV shows of all time. It is available on Netflix, HBO, as well as other streaming services.

This more of a reality TV show than a series. Impractical Jokers has four BFFs who dare each other to perform funny antics. They compete to embarrass each other. Laughter is guaranteed from start to end.

The loser board and final big punishment only make it funnier. You can catch this on Comedy Central , Netflix, as well as online.

This is probably one of the best TV series of all time. How I met your mother begins with a father, Ted, telling the tale of how he met their mother. The series then recounts all the events that led up to their marriage. Get ready for some comedy, romance, and weird slap bets.

You can watch this on Hotstar as well as Star World.

Peaky Blinders is based on gangsters and the underworld. The story is loosely based on a real gang of the same name – Peaky Blinders. The gang was active in England after the first world war. It has the perfect blend of crime, drama, and thrill. You can catch this on Netflix.

Suits is a legal drama based on an under-qualified yet talented lawyer Mike. This is supposed to be a secret between him and Harvey. Without the charming bromance between Mike and Harvey, Suits would have been just another TV series based on law and crime.

You can get this on Netflix, TeaTv as well as Amazon Prime, Prime Video.

Among the trending ones, Money Heist is in the spotlight and one of the best TV series in recent time.

Money heist is about a mysterious man “professor” who wants to pull off the biggest heist in history (with a cool mask and red overalls). The professor brings together people to carry out the heist. It is available on Netflix.

An urban teenage girl from Manhattan dropped off into a pretentious suburb. Suburgatory tells the story of Tessa, who is moved into a peaceful suburb by her father, George Altman. However, Tessa has a hard time adjusting to suburban life, which gives rise to comic situations.

You can watch this on Netflix and Hulu, Vudu.

Stranger Things takes Science Fiction up a notch. The show focuses on a group of 4 tweens who stumble upon an unusual girl, “Eleven.” Things take a dark turn when one of the friends, Will, goes missing. Lots of monsters promised with the parallel universe!

You can stream this on Netflix as well as TeaTv and Amazon, Vudu.

The fallen Lucifer lives in the present-day Los Angeles and runs a bar. Things take a different turn when a colleague is murdered. The story revolves around how Lucifer and the detective are conflicted about their budding romance. This happens alongside the murder mystery and other supernatural events.

It is available on Netflix, ViaPlay, and Amazon.

The Walking Dead is centered around a cop who wakes up from a coma only to find himself in a world ruined by a zombie apocalypse. He then joins a group of survivors. It’s all about survival, action, and a lot of zombies.

It is available on Netflix and Hotstar.

So, this was a list of some of the best TV series of all time.